Inspiration from the Source– Calabash Festival in Jamaica

I’m writing today from Treasure Beach, Jamaica, home of the Calabash Literary Festival. Calabash, the largest literary festival in the Caribbean, is very dear to my heart. When I served here in the Peace Corps, from 2002-2004, I had the privilege of being in the Calabash writer’s workshop under the instruction of Jamaica’s top-selling author, Colin Channer. This year was my first time at the festival since 2004, and it still has its magic.

Part of what makes Calabash great is the setting. It’s at the back of the host resort, Jake’s. They have a large grassy area with an open, roofed stage that is literally right in front of the ocean. Hundreds of chairs were set up under giant canopies facing the stage, with the ocean as the backdrop to it all. 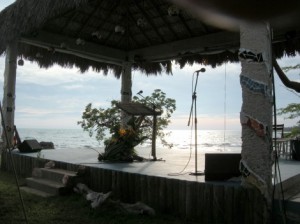 What makes it more special, though, is the audience’s enthusiasm. There are quite a few tourists, but it is mostly Jamaicans who come from all over the island. There is only one stage, so hundreds of people watch the authors at each session. While there are fewer authors and sessions than other events that I’ve attended, such as the L.A. Festival of Books and the National Book Festival, having only one session at a time gives it much more of a community feel. Both times I’ve been there, the crowd has been enthusiastic and supportive about all the authors, from emerging local poets to world-famous literary giants. On Friday night, Rab Wilson, a Scottish poet, took a picture from the stage and then said, “I want to show my friends at home that more than ten people will show up to a poetry reading.” 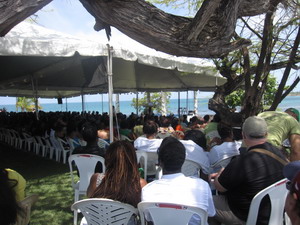 We managed to get a ride to the festival in a van with two of the authors—it was very nice of the Calabash organizers to let us hitch a ride with them from Kingston. One of them, Adziko Simba Gegele, was in the writer’s workshop with me during (and after) my time in Jamaica. She has just published her first novel, All Over Again, which is full of cute and funny stories told from the point-of-view of a twelve-year-old Jamaican boy. The other author, Ann Margaret Lim, is a poet who recently published her first book, Festival of the Wild Orchid. She showed me her poetry book, which was very good, and I showed her the first three chapters of my novel. She said that the novel had a lot of truth about Jamaican life and that she wanted to find out what happens next, which was nice to hear. She also corrected a mistake in my Patois in the first chapter, which made me more convinced that I need to get at least one Jamaican to help me edit it!

Another highlight of the festival was the open mikes, in which anyone who wanted to could have the stage for up to three minutes. I kind of expected the sessions to be full of people who merely thought they were talented, but there was actually a lot of real talent. In fact, the open mikes were more entertaining than some of the scheduled authors. There was a mix of tourists, Jamaicans currently living in “foreign,” and local Jamaicans who performed, along with people from every variety of profession and background. There were a fair number of professional writers and English majors, but some of the best poems were from people in professions like cosmetology and farming. The audience wasn’t as big as it was for the published authors, but there had to be at least a hundred people who stuck around for any given session, which was even more impressive since it was during lunch and dinner times. Some of the readers even had published books. I got up and read the opening scene of my novel. It got a good reception, but my stage presence was not at the level of most Jamaicans—there are some expressive readers in this country! One man read a poem about Jamaican food. On paper I think it would only have come across as a slightly poetic list of Jamaican dishes, but he read it with such expression and body language that it was mesmorizing to watch and listen to. When the audiobook of Kingston Dreams gets produced someday, I will not be the reader! 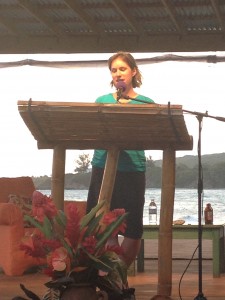 All in all, it was a very fun event. I was hoping to do some networking to get me closer to publication, and I did get a few business cards and some advice. At the same time, though, I thought it would be worth it to make the trip for the sake of attending Calabash, and I was right. Even if this trip doesn’t get me any closer to publication, it was a very fun and inspiring time. Calabash was founded to “transform the literary arts” in the Caribbean, and I think it is doing that. There is definitely a lot of interest in literature and emerging talent, and I hope that soon the Caribbean will be as well known for its literature as it is for its music. Shayla would have loved to be here!

Why Every Fiction Writer Writes Fantasy