Is my due date my deadline?

As my Web site title implies, “Almost Published” does not mean published. Unfortunately, it doesn’t even mean that my novel is finished, though I am at the point where I need outside editing and feedback to make it good enough so I would want it to be published, let alone good enough for someone else to want to publish. I’m considering paying for professional help (for the book, not for me), but the practical side of me hesitates at spending more than a small portion of my savings on an unpublished book that has no guarantee of making me money. The more imaginative side of me says that finishing my novel is part of my dream, and I am on a deadline.

Why am I on a deadline? Not because I have an agent, or a publisher, or even a somewhat arbitrary date set by the folks at Nanowrimo, but because I have a due date: November 28. If all goes as planned, my husband and I will have our first child sometime around the end of November or beginning of December. We are both very excited about this new stage in our lives, but I also predict that it will put my writing progress on hold for at least a few years. 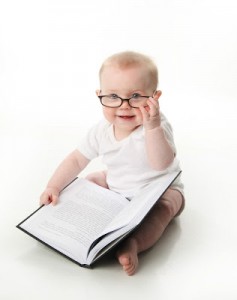 Now, I know that nobody is going to hold up a gun to the stroller and say, “Your baby, or your novel.” Besides the obvious absurdity of that situation, I probably won’t be carrying around a copy of my manuscript and signed papers giving away my copyright in the stroller. (Though if this did happen, it would be great for publicity, once I got over my shock and the baby and I escaped unscathed, since people might want to read a novel so good that it brought about this crime.) But if there was some stark, absolute choice, I have no doubt that I would choose my baby. I know that the choice between writing and parenting is not a zero-sum game for everyone, but I have several reasons to believe that it will kind of work out that way for me, for at least the first few years:

1) I probably won’t care nearly as much about my writing once I have a baby to take care of. I really want to be a parent and to have a family, and that’s more important to me than success as a writer.

2) I don’t do well without sleep. I know that this is a bad trait for a future mother, but I’ve decided I will just have to deal with it. Unless I have one of those miracle babies who sleeps through the night after just a couple months (please?), there’s a good chance I’ll be too exhausted to write.

3) As of now, my husband and I would like to have more than one child, so that precludes this article’s advice that a successful writer should just have one.

4) I have not yet earned money from my writing. If I did (and that is a goal), I could feel good about hiring a nanny or sending the baby to daycare so I have time to write. As it stands, though, I find it hard to justify paying for childcare on a more than occasional basis when I’m not either earning money or spending time with my husband. And when I do get some time to myself, I might not want to spend it staring at my laptop.

5) My husband and I currently live in Los Angeles, recently ranked the least affordable city in the country. One Pulitzer-prize-winning author, Jane Smiley, commented on the aforementioned Atlantic Monthly article that she has three children, but lives in Iowa, where high quality childcare is affordable. Then another successful author, Michelle Richmond, said that she has only one child because childcare and housing are both unaffordable where she lives. I checked Michelle’s bio, and she lives in Southern California. Sigh. (Yes, I’m aware that we could move, and that might happen, but we don’t want to do that unless we know that at least one of us has a decent job with family health care.)

But between now and November, amidst all the uncertainties of the future. I have the time and the inspiration and the ability to focus on my novel. I don’t care so much about being published before my due date, but I would love to do a really good revision and proofread by the beginning of November and send it out to agents before I go into labor. At that point, in my imaginary world where all goes according to plan, the agents and publishers would mostly take over and only occasionally need my time, and by the time I was ready for my book tour, my baby will be sleeping through the night. But even if it doesn’t go anywhere, at least I would have a finished novel sitting there that I might pick up again in the future and try to do something with. And I’d have a sense of closure and accomplishment, even if that first novel never sells.

Unfortunately, while I’m now at the point where I really need some outside feedback, I don’t know if that help will come for free. Though I love my critique group, they’re not going to get to the end of my novel at our current rate of 6,000 words every three weeks— I’ll be about 20,000 words short unless I cut a lot from the end. (I do need to cut my word count by at least 20%, but a lot of this will likely come from the beginning and middle of the novel, which they’ve already looked at.) This means that not only will I not be able to apply their feedback to my revisions before I have my baby, but I may not get the end critiqued by them, because I’m not sure if I’ll have time to critique all of their work when I have a newborn. One option is to find another critique group, but that group would have to work at a pace that would get through the entire novel in just a few months, while my current group has already had a year to start from the beginning. A better option might be to seek out two or three authors who want to swap an entire novel and critique each other’s, if I can find those people. So if you’re reading this blog and would like to be one of those people, or you have some experience with the craft of writing and would like to read my novel and give me feedback free of charge, let me know!

Of course, I can always get someone to edit my novel for a price, as I mentioned before. I’m looking into hiring an editor, but many of them are out of my price range. I’m willing to spend some money on my dream, but I hesitate to spend a good portion of my savings on it when I have other expenses to think about.

Though I feel a lot of pressure to finish my novel soon, I know that giving birth doesn’t mean the end of my writing career. As one mother in my critique group said, “You’ll always be a writer, even when you don’t have time to write.” I hope that having children, with the myriad of emotions and ups and downs that they bring, will be a source of inspiration for my writing. I know that I’m lucky to have a supportive husband, and that I’m privileged to have even had time to get to my third draft. And I also know that life rarely goes as planned, and I have no idea what the future will really hold for my family, my writing, or anything else. Whatever happens, I hope that in the future I’ll have both the inspiration and the time to write about it.

Observations on Being a New Mom